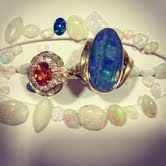 October is the month for two gemstones Opal and Tourmaline.  Opal is considered the worlds most popular phenomenal gem.  The Arabic legends say opal falls from the heavens in flashes of lightning.  The Greeks believed opals gave their owners the gift of prophecy and guarded them form desease.  The europeans believe that opal is the symbol of hope, purity, and truth.
Opals have been thought to be unlucky to wear if this gemstone was not your birthstone, but this superstition comes form a novel written in the 1800's (Anne of Geierstein by Sir Walter Scott).  Throughout history opal has been infact regarded as the luckiest and most magical of all gemstones because it can show all colors.

There are four types of Opal

White Opal: Translucent to semitranslucent with play-of-color against a white or light body (the most commonly seen)

Black Opal: Translucent to opaque with play-of-color against black or a dark body

Boulder Opal: Translucent to opaque against a light to dark background.  Host-rock fragments are part of the finished gem.