Ocotober is a birth month that shares two birthstones.  Opal and Tourmaline.  Tourmaline is gemstone which has been used and been around for centuries, but before modern mineralogy it was identified as other gemstones such as ruby, sapphire, emerald, etc.  The confusion about the stone's identity is reflected in its name, it comes from toramalli, meaning "mixed gems" in Sinhalese (Sri Lanka Language)

Deposits of tourmaline were discovered in Brazil by Portuguese explorers in the mid- 1500's.  In the late 1800's tourmaline became known as an American gem by efforts of Tiffany gemologist George F. Kunz.  Tourmalines have one of the widest color ranges of any gems. 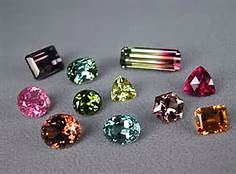